This blog marks the beginning of our series on biodiversity. Biodiversity refers to all of the living organisms on earth, which include plants, animals, bacteria and fungi.  Many species are being threatened with extinction due to the activities of humans.  Pollution, habitat loss, climate change, and population growth have put many species at risk of extinction.  Diverse ecosystems are healthier and more capable of surviving disturbances, which is why conservation of our biodiversity is essential.  The loss of just one species can affect many species that it interacts with in the ecosystem.

Our native bees perform an important function.  They are the most predominant pollinators of flowering plants in the ecosystem, and without them, many of our native plant populations would decline or go extinct.  This would negatively impact other organisms that depend on these plants for food and shelter, and in turn, would affect the livelihood of organisms further up the food chain, such as predators. All species are essential for the survival and maintenance of the ecosystems in which they occupy. 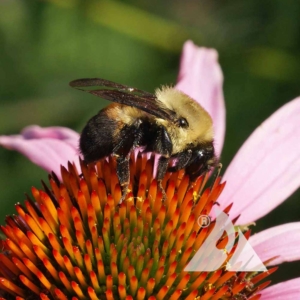 There are around 4,000 species of native bees in North America.  Most species of bees that you see in urban gardens, farmlands and wildlands are native bees, but there are some species that were introduced to North America.  These include Honey Bees, European Woolcarders and Horn-Faced Bees.  Native bees range in size from 2 millimeters for some Fairy Bees (Perdita species) to several centimeters (some Bumblebee queens).  Some of our native bee species are social bees that live together in colonies, but the vast majority are solitary bees that live on their own.

Approximately 75% of our 4,000 bee species are generalist foragers.  These bee species are able to collect nectar and pollen from a wide variety of different plants, which often include both native and non-native species.  The other 25% of bee species are specialists that forage on just a few native plant species, and some of these are dependent upon a single plant species.  Specialist bees emerge from their nests when these plant species begin to flower, indicating that a very close evolutionary bond exists between the species.

There are 47 species of bumblebees, and most of these species are social bees that form colonies in underground holes, cavities in trees or logs, grass tussocks or abandoned bird nests.  Bumblebees have large bodies covered in soft hair that makes them look furry.  Often there are contrasting bands of color on their abdomens, and they have long tongues that allow them to feed from flowers with long tubes. They are excellent pollinators of many native plants as well as numerous crops.  They are the main pollinators of greenhouse tomatoes and peppers, as these plants require “buzz pollination” in order to bear fruit efficiently.  A bumblebee achieves this by grasping the reproductive parts of a flower and vibrating the wing muscles at frequencies high enough to “sonicate” the flowers and release their pollen.  Honey Bees do not have this talent.

A queen bumblebee starts her colony in the spring after waking up from hibernation.  She creates cells made from a waxy material that comes from glands in her body and lays her eggs in them.  Female worker bees forage on flowers to feed the larvae and are responsible for cleaning and protecting the colony’s nest. 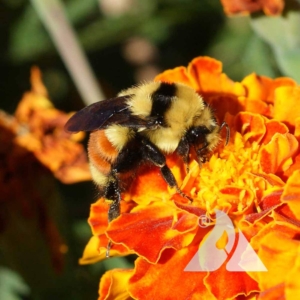 Watch for our next biodiversity blog on native bees – the Sweat Bees and the Mining Bees.

Check out our Bee Conservation Mixes